A suggested ‘quiet’ night out at the casino and strip club (by Rolphy) was vetoed by Skipper Tricky in favour of a relaxed night in ahead of our early start the following day. It emerged that VC Flattley and C Booker had their own film night spooning to Lord of the Rings and the A-Team (unsure who was big spoon).

Allegedly, there was also some choice video footage taken from the room of ‘youth culture’ (Badrock / Astley / Rolph) discussing the finer points of bathroom etiquette. The less said about that the better.

Prompt arrival at breakfast (no fines) was observed ahead of our 8am taxi to Marsa Sports Club.  Badrock  arrived at the dining table with a monster of a Full English, commenting, ‘Have you seen how small these plates are?’, not realising that he had in fact selected a tea saucer. That boy is a different breed (more to come).

Plentiful supplies of H20 (due to injuries to the 2 senior players Jho and Bobby, Badrock did not have to complete waterboy duties for the entire week), Gatorade and bananas were purchased for the day ahead. Biggy Milne then proceeded to start an argument with our taxi driver for his tardiness.

The first game saw Romiley put in against Marsa CC. Badrock unfortunately edged a full-toss to the keeper early doors, but skipper Tricky (another unbeaten 50, despite refusing to retire after hitting his half-ton! Fines required), Benny and Rolphy then scored freely to post a competitive total of 159-5 off 20. Tricky managed to smash a 6 to the adjacent golf course and Benny did the same to the archery course. Mash-up. 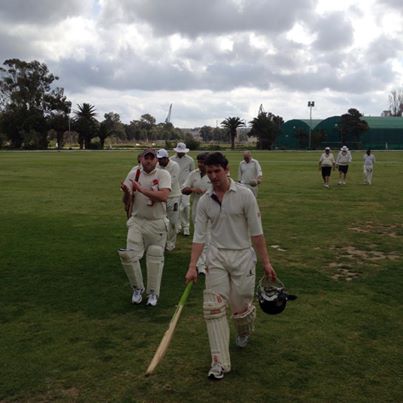 Ethel aka The Skull aka Ethan bowled very tightly for 1-10 off 4. VC Flattley deserved a fine for shelling the simplest of catches off Olivier Giroud (Chris Booker), who received the call to action, much to his disbelief. Booker then proceeded to strike the batsmen in the nether regions, who collapsed to the floor in agony (you could hear the groans from the onlooking spectators as the ball left its mark).

Rolphy finished them off (I know – that doesn’t read quite right) to restrict Marsa to 109-9, breaking a bail in the process, celebrating wildly. 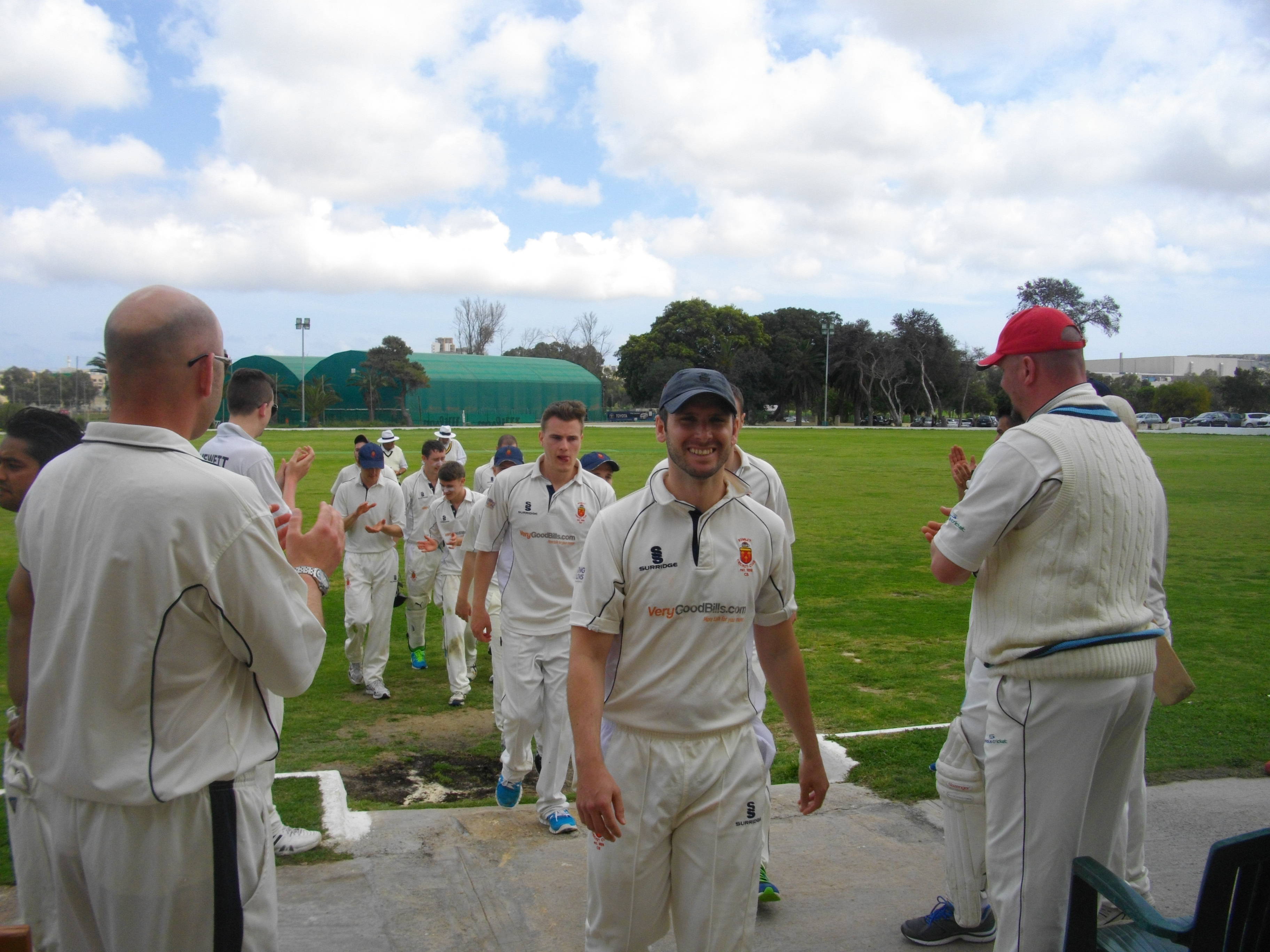 Our second game, against the touring side of Aldenham CC followed shortly after, where they won the toss and were restricted to 109 (mainly due to the fact that Badrock didn’t bowl). Ballcock snaffled several classy stumpings and catches in the process, as Nemanja Mallinson and Sammy Ast bowled tightly. Ben did however miss a stumping off their skipper on 0, who proceeded to rack up 46. Oops. 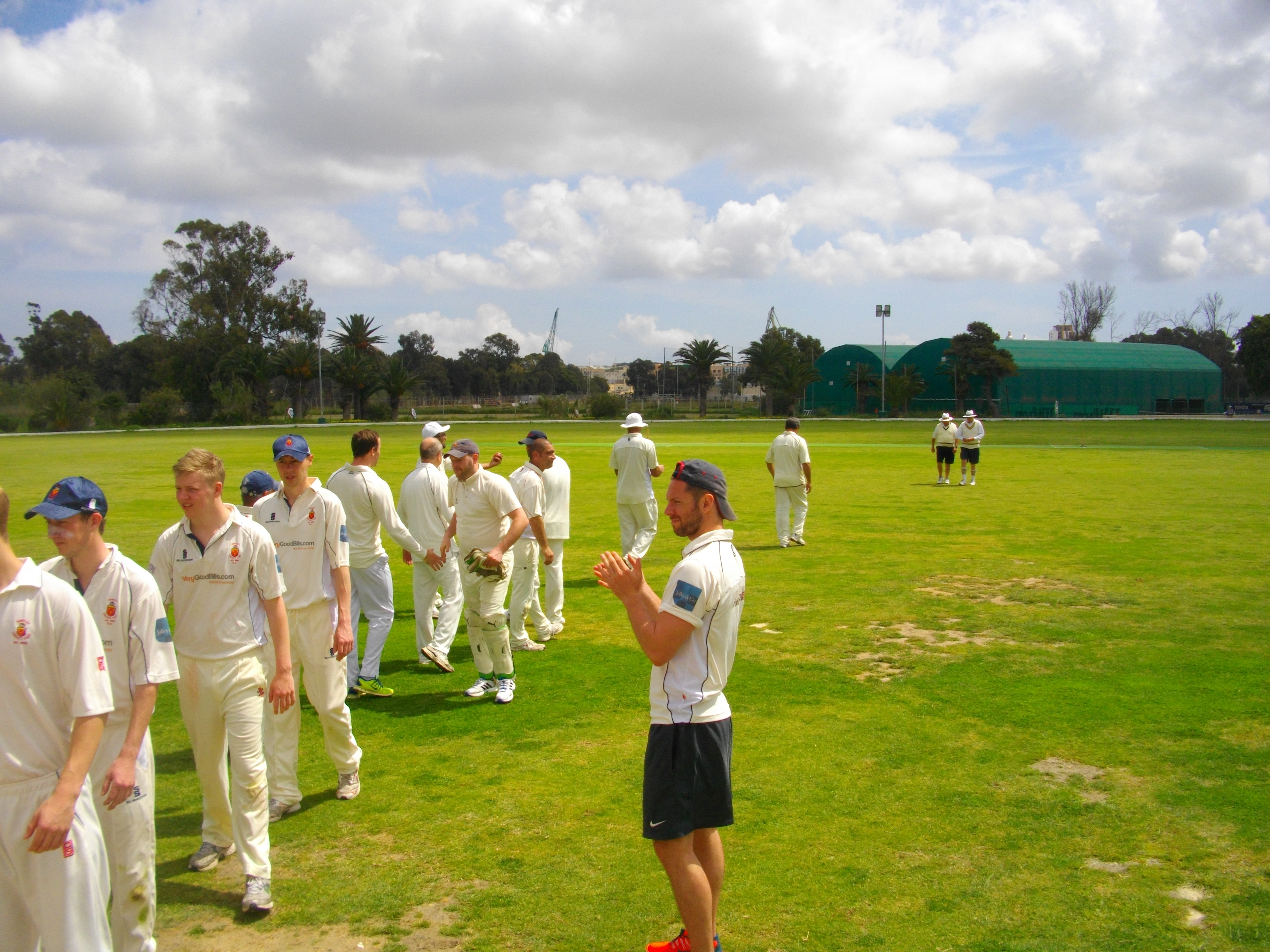 C Booker and VC Flattley opened the batting and put on over 50 for the first wicket, with some classy drives, sweeps and cuts on offer for the sun-drenched supporters at the Marsa Oval.  James ‘The Wall’ Badrock (who put the shutters up with 6 overs to go with a strike rate of less than 50) and Sammy saw us home with 5 overs to spare for the loss of 3 wickets to give us our third win out of three. 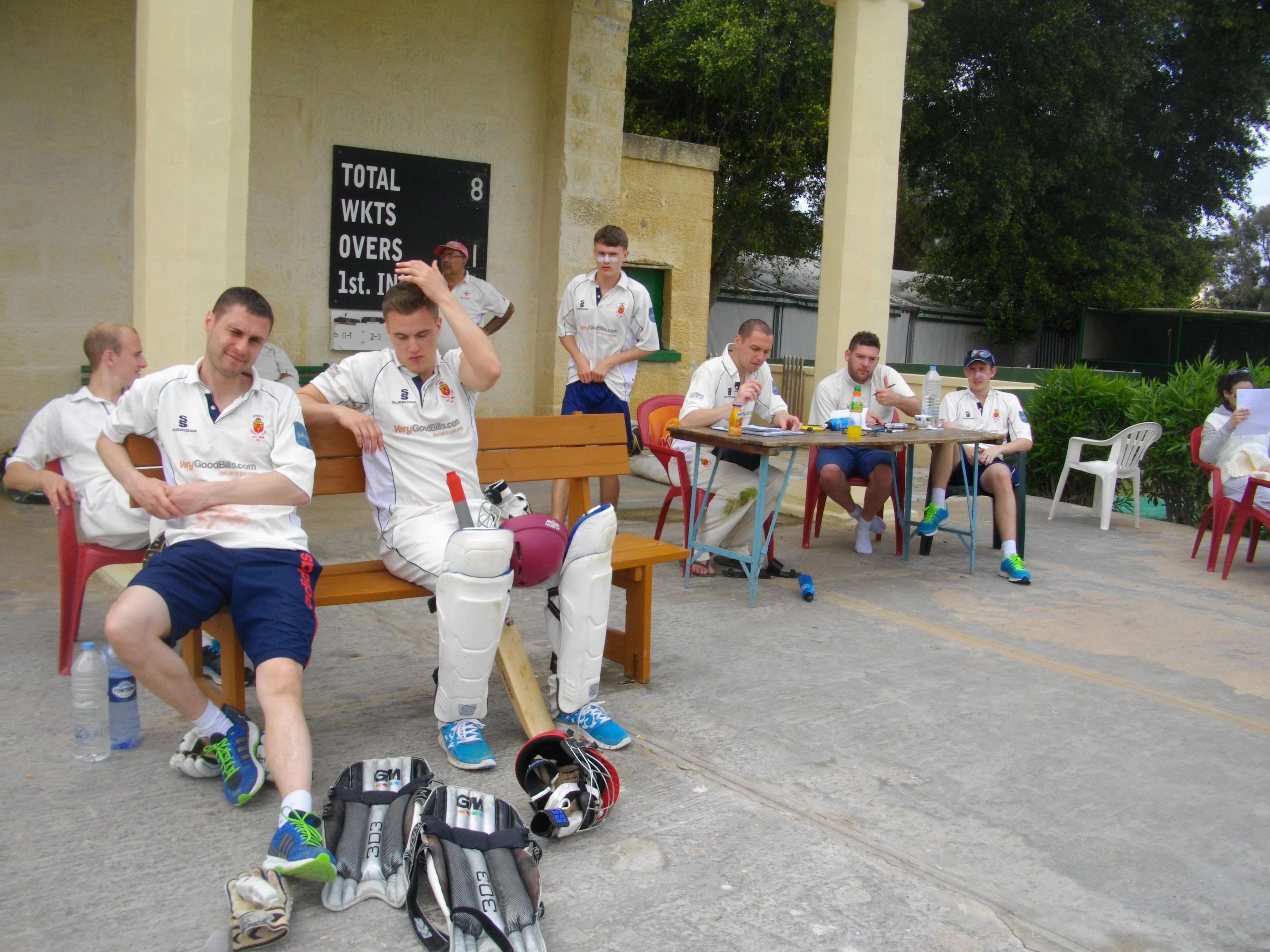 A dead rubber between Marsa CC and Aldenham CC followed, with the boys relaxing with a well-deserved beer in the sun as they nursed their sore muscles after a gruelling day.

Post-match beers in the bar followed with fines dished out (52 euros worth!), most notably from Flattley who parted with 11 euros (due to a multitude of bad choices). 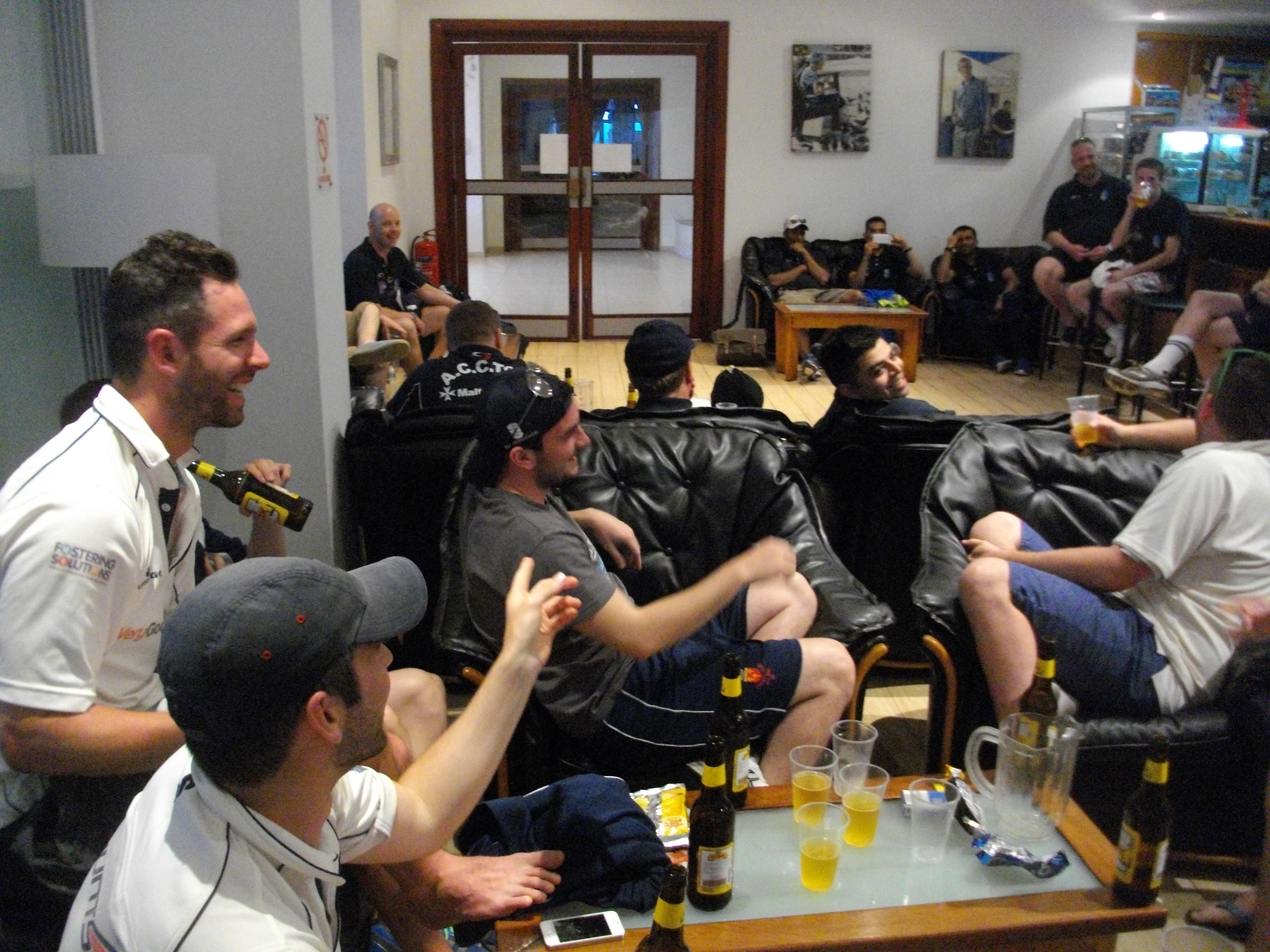 The guys from Aldenham and Marsa were great craic, and we exchanged MOM awards over a cold Cisk or 3, and tales of their tour to date. 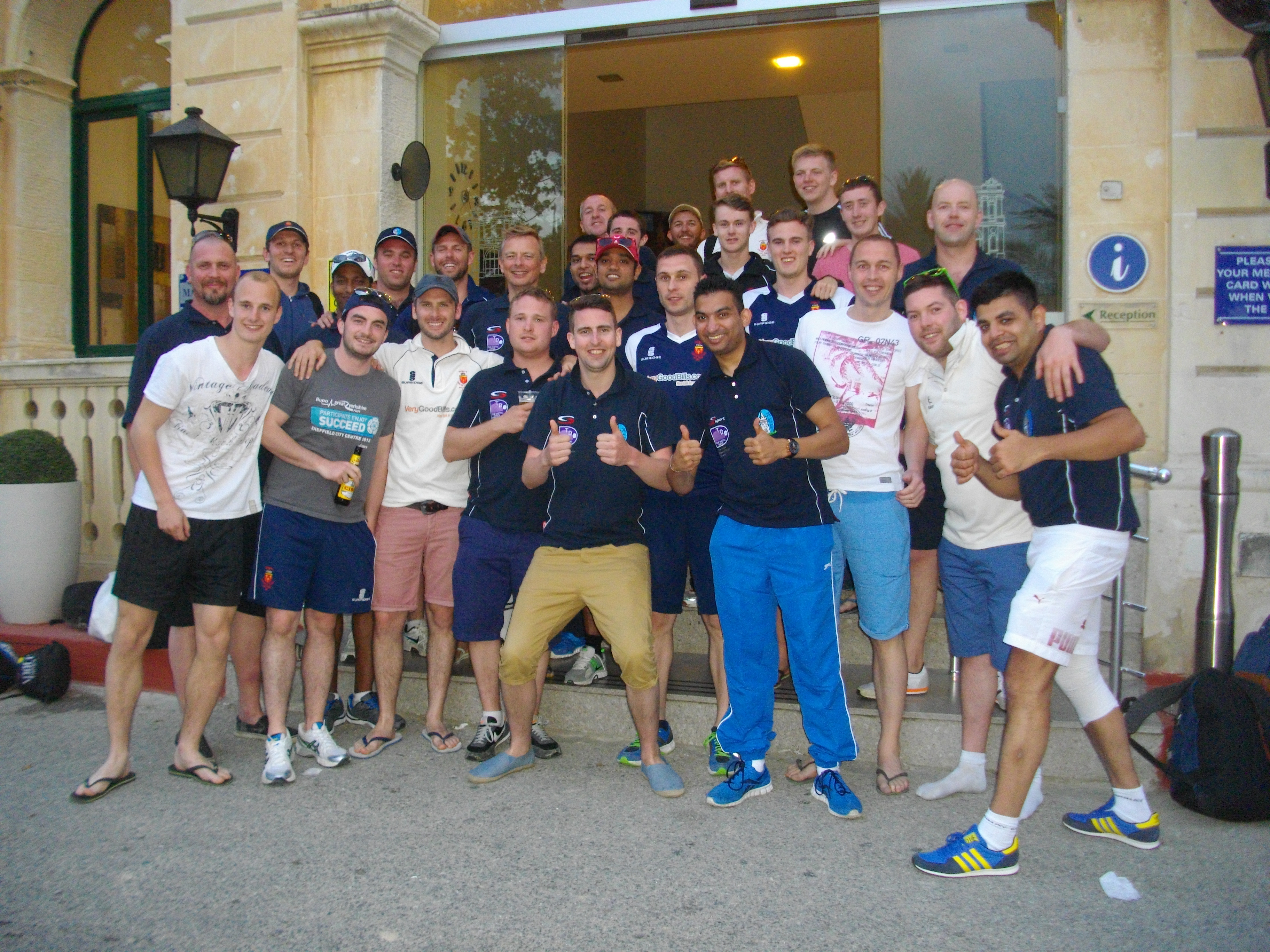 It was then straight back to the hotel for dinner, where Badrock decided to portion a huge amount of ‘mashed potato’ on his plate. This later transpired to be apple sauce…oh dear, oh dear. Nemanja Mallinson (a song has been created on tour for him) is apparently ‘coming down with something’ – suspicion is that this could be Cisk-itis.

Baby Dave-isms of the day;

1) Prior to padding up to bat in the second game of the day, Dave came out of the pavilion with 2 small-looking pads in his hands, asking if these were ‘cutting-edge technology pads’. The response was, ‘ No Dave, they are wicket-keeping pads.’ Dave responded with, ‘Oh right,  I thought I could get away with them.’ #legend

2) Actually from the previous day, but Dave took his chance to try out his newly-acquired foreign language skills when conversing with the newest members of the Belgian supporters club. You had to be there to appreciate it truth be told, but just try and picture it for a minute.

Heading out for a few chamomile  teas (Baby’s favourite drink) to celebrate 3 wins out of 3.

35-over match ahead tomorrow against Marsa CC x