Fines master Sammy Snowman Astley amassed over €500 in the space of 7 days, with fines set at either €1 or €2, this equates to around 300 fines issued. This money was to be used to fund our last night out.

The squad assembles in the dungeon, 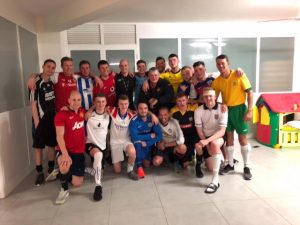 where proceedings were kicked off by Ref Peanut. A few classic drinking games such as DonnaPong (like beer pong but with the rankest beer on the planet, Donna), followed by Last Jack, a card game resulting in the consumption of 2 bottles of Tequila Rose and a bottle of captain Morgans rum. The upshot of such antics was Vomitgate. With no culprit found from the 18 of 19 players present and the final player in the dungeon trying his luck with an Irish gal from next door, it was up to tour guide Pedro to step up and clean the mess.

After a couple of photos for the press;

Fergie time was declared and we were off to hit Paceville for one last time.

After a quick team talk in Hugo’s Sports bar, the venue for this classic picture from 4 years ago; 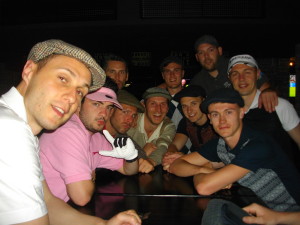 we headed to Corks where Fergie huddled the squad together for one last question before chaos would ensue. How do we win football matches??

SHOTS, lots and lots of SHOTS!

What followed was slightly hazy for most…

Including; 8 people asking for photos with Jimmy Vardy including a huge mob on the strip, top effort on the outfit Robbo!

An argument with the DJ in Club Nordic, who’s responce to our request for him to play Free From Desire was ‘I’m not a juke box (censored)’. After turning down a €50 bribe he proceeded to play said song in an attempt to rescue the dance floor following some dodgy Maltese grime.

Various cards were issued for anyone James deemed to be acting inappropriately. If anyone got within 2 feet of the opposite sex the whistle would go off across the club and JB would come wading over brandishing a card.

Arriving home at 4am(ish), 2 players were MIA and with only 4 hours until the taxi a message was circulated that all luggage would be taken to the air port but it was every man for him self to get on the plane.

The decent down the stairs at 7:30 resembled a scene from The Walking Dead. 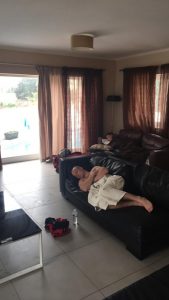 However, all 19 players were present and somehow managing to remain upright for the twenty yard walk to the awaiting mini bus.

Ciskitus was at epidemic levels. We were left regretting not putting James Bashford in quarantine after the first night to avoid such an unprecedented spread of the disease.

20 minutes down the road and claiming motion sickness Tricky’s illness hit a critical level, resulting in a 1 hour nap on a cold granite floor at gate 7 of Malta airport. 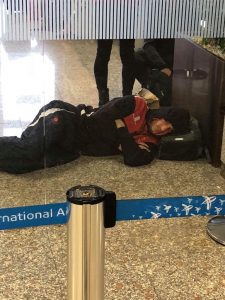 The rest of the journey went off without a hitch, much to the delight of the air hostesses who welcomed us to the plane with ‘have we got the whole cricket team flying with us today?’ You could see by the look on her face she was expecting problems. What she actually got was 19 snoring cricketers, exhausted after a fantastic week away enjoying great cricket, terrible beer, beautiful weather, terrifying taxi drivers and a wonderful country.