After Bananagate yesterday it came as no surprise when we woke this morning to Orangegate. Returning from yet another night out in Paceville the yoths, not satisfied with the nights entertainment, decided to throw an orange around the dungeon. The subsequent mess resulted in yet more fines for those involved and another trip to the cash machine…

It was an early start today, a 9am taxi meant a 7:30 alarm. This proved to early for some, although everyone did eventually assemble at the Marsa Sports club. Upon arriving we were greeted by a member of Marsa CC who, with a grin, explained we would being given a good game today. i.e. he thought we were about to be batted. The opposition for the day were Harrow School 1st XI. Encase your wondering, yes this is one of the poshest boarding schools in the UK for kids aged 13-18 and the same school that stared in the TV show A Very British School aired on Sky 1. 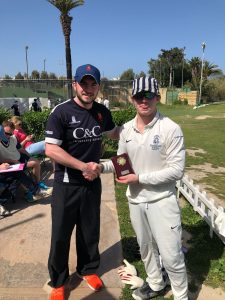 They came with the daft hats and posh chat. The temptation to up our game was irresistible and we took the field fired up to leave our mark. Billy and Mr Angry opened up to good effect but it was the new combination of PG and Hamish Buzzer Burrell that proved the undoing of Harrow’ star batsmen. Some light hearted sledging greased the wheels and by the time Billy ‘The Burglar’ came back on to sweep up the tale there was little resistance offered. Harrow were all out in 36 overs for 146. 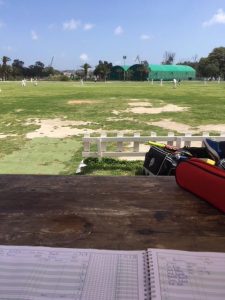 After raw pasta for lunch, not the usual high Marsa standard we have come to expect, Bilbo elected to open with Sammy Snowman Astley and Ralph. A good opening spell from the Harrow chaps saw both the Romiley openers fall. David P1 Badrock and Buzz came to the crease and as bowling changers were made Romiley took full control of the game. Both P1 and Buzz retiring on 50 and the game was soon wrapped up with 8 wickets and 14 overs to spare. 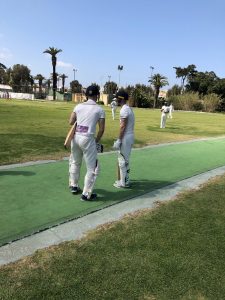 Post game Cisks were enjoyed in the beautiful weather but it was at this point a message came in from Chef Joseph. He has a family emergency and can’t cook our dinner tonight. 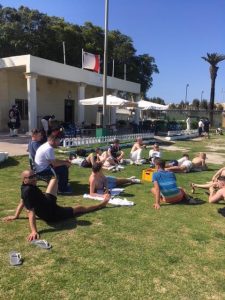 Good job we brought a Chef with us, in the form of opening bowler Alex Razor Ruddock. Stepping in at the last minute there were some fears that we were going to be served a full english for tea but Alex knocked it out of the park with a killer BBQ, accompanied by a potato salad whipped up by sous Chef  Milne. 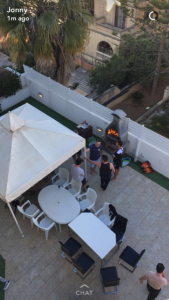 After dinner another big fines meeting was held. Most notable fines were as follows:

James Bash – Fined for poor levels of personal hygiene, reviling that he has only had 2 showers in the last 5 days. Given that every day has been over 20’C and he has played 2 cricket matches smell levels were deemed unacceptable.

Sammy Astley – Fined for gardening the international standard astroturf wicket, attempting to pat down the ball marks with his bat…

Paul Mini Meds Stuart – Fined for asking the non striking batsman what the rules are around LBW’s while currently umpiring a game ‘can it be out if it pitches outside off?’.

A big night out for most tonight followed by Kayaking around Gozo tomorrow.