The morning started with a major clean up operation by Sammy, Benny and Biggy. Puddles of beer on the floor and banana splatted all over the walls were the 2 crime scenes.

As some very ropey looking yoths rose from the dungeon an investigation was launched. First to the stand, James Bashford, denying all knowledge of the events and claimed to have not been been at the scene.

Bananagate was launched and following further enquiries Bash was found to be guilty of both charges. Not only earning himself several fines in the process but also a reputation as the youngest snake at RCC for his stone wall denial.

It transpires that after coming in from a night out in Paceville, the puddles of beer were from Bash pouring Cisk over his head. Although I would imagine that is probably the warmest shower he’s had all week as the hot water in Villa Diamantina is very limited. The banana was used in the absence of a cricket ball for a quick pre-bed game of indoor cricket.

With the mess cleared up a late breakfast was made and prior to setting off for the game a quick trip to Greens supermarket was had to replenish supplies. It’s worth mentioning that Pedro’s initial food & drink budget of €380 lasted one day and the amount of food that 19 young lads can consume has surprised even the checkout lady in the supermarket who gave us 2 free cases of Cisk today as a reward for our custom.

Once at Marsa Sports Club the toss was won by Captain Robbo electing to bat first against what looked to be an ageing Cryptics CC side.

Cryptic are a wondering cricket club that were founded by Oxford and Cambridge graduates who initially arranged cricket matches while away on holiday together. This tradition has carried on over 100 years with tours of Kenya, Spain, Corfu to name just a few.

Romiley started well with 50s from both James P2 Badrock and Sammy Albino Astley. Further damage was done by Biggy striking 39 from 10 balls including a huge 6 landing in the adjoining playground and Robbo who added a more steady 46. Bailey also added 22 to the score with some strong hitting down the ground before amusing all by claiming the full straight ball that bowled him ‘took off’ causing him to play down the wrong line. This was compounded by the admission that he also asked Sammy if the high quality international standard artificial playing surface was ‘doing much’ when he arrived at the crease. 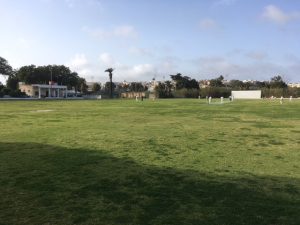 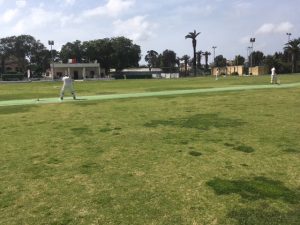 In the second half our bowlers came up against a solid top order. Although no attempt was made to chase the Romiley total, the Cryptic CC top order put up a strong resilience. J Hamilton retiring on 50 to follow up on a 100 against Malta yesterday. 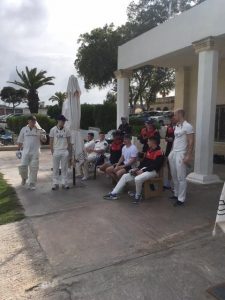 However, a breakthrough was made by Pedro and further wickets by Mikey and Paul Mini Meds Stuart limiting them to 140 for 4 from their 30 overs. 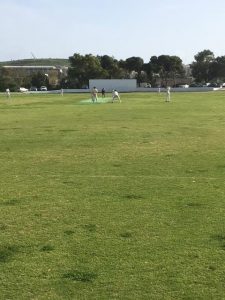 A special mention at this point should go to skipper Robbo for bowling 4 wides in one over and setting the standard for the most runs off an over, 18.

After the game a quick Cisk was had in the Marsa bar before heading back the Villa where Chef Joseph was once again cooking up a storm. 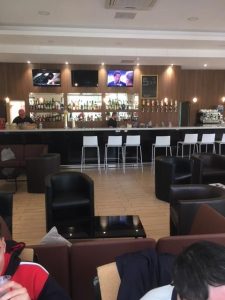 On the menu this evening was roasted chicken breast stuffed with garlic, feta cheese and herbs. Served over a bed of creamy mash potatoes drizzled white wine and mushroom sauce. For pudding, chocolate cake. By fare the best food we have had this week.

After dinner a fines meeting was held. Hosted by Sammy and held the court room style. Fines for various cricketing misdemeanours were issued as well as a number of off field offences. These included, abandoning supporting the team to watch the horse and cart racing next door, accidentally throwing a cigaret bud at a passing child and sleeping to close to a fellow team mate. The claim was made that the person in question just rolled over while fast asleep in bed but this was dismissed by the  fines committee as overwhelming evidence suggested foul play.

A night out watching the end of the Masters Golf was suggested but after a long day it was decided that we would stay in and view it on the laptop instead. Those who are not interested went in to the lounge to watch some TV, well thats what they said. This turned out to be the children’s film Moana… 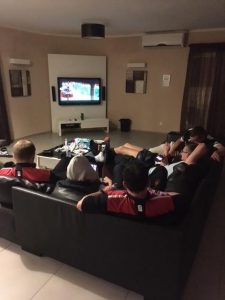 Early start tomorrow with a 10am start in a 40 over game against Harrow CC.