The alarm went off at 7:30 for those taking part in the diving trip today. Those who opted out and instead chose a night in Paceville, this worked well as they rolled in at a similar time and proceeded to sleep most of the day. The only exemption being Pedro who is currently in Paceville attempting to set a new Guinness World record for the most Cisk consumed in one continuos sitting.

During said night out an unfortunate lost bet resulted in a night in the cot for Paul Churchill Stuart. 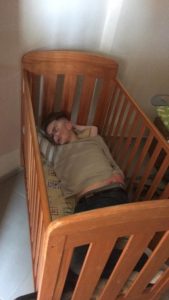 The dive trip was mostly enjoyed by all, the only complaints came from those suffering from ear pain. Skipper Bilbo claimed this could be an early symptom of Ciskitus but a cursory search of Google has relieved little evidence to support this. However, himself and Albert (Sunday name for Albi apparently?) did continue, completing the second dive of the day and explored HMS Maori. Unfortunatly suffering subsequent bleeding from both ears and nose. Only Junior Hooton had the sense leave that one alone. 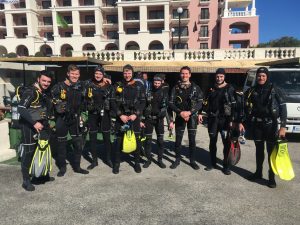 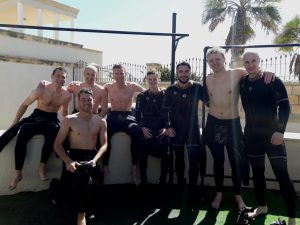 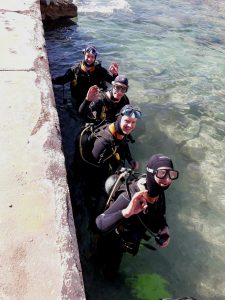 The group assembled for an early pre-darby match dinner, served by Chef Joseph, Fajitas were on the menu and duly enjoyed.

A quick taxi down to Paceville, a coffee for Pedro … 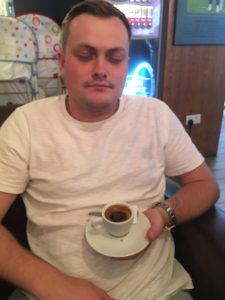 and away we went. Man Utd on one side of The Gastro Pub and Man City fans on the other. 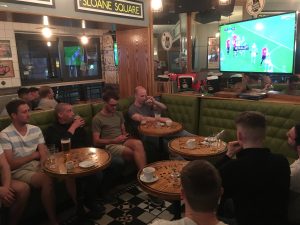 A tremendous game resulted in two smashed glasses and literally spilt milk, as both sides enjoyed a thrilling rollercoaster darby.

The group then split, old (cool) heading for killer pool before pizza and bed, young (daft) out in Paceville again.

Dick of the day goes to Bailey Bourke for demonstrating a complete lack of culture. Asking what currency comes out of the cash machines in Malta? Given that you’ve already spent €500 in 3 days I’d have thought you’d have got the hang of it by now.

Tomorrow we have an early start and Robbo coat hanger Roberts will lead the side out against the touring side Cryptics CC. 30 overs a side 14:30 start. Keep your eyes on Facebook Live for updates.